Donate to the Duchy Law Appeal

We want to get at least 500 people donating at least £20 each, so we can do more to challenge the Duchy of Cornwall.

The Duchy of Cornwall belongs to the nation. But Prince Charles is allowed to run it as his own private business. And he gets a huge number of exemptions from laws the rest of us have to follow.

The government is now reviewing leaseholder law, which means millions of home owners will be able to buy the land their house stands on.

Unless you live on Duchy of Cornwall land. Prince Charles routinely insists on legal exemptions that give him huge financial advantages, and which discriminate against Duchy tenants. 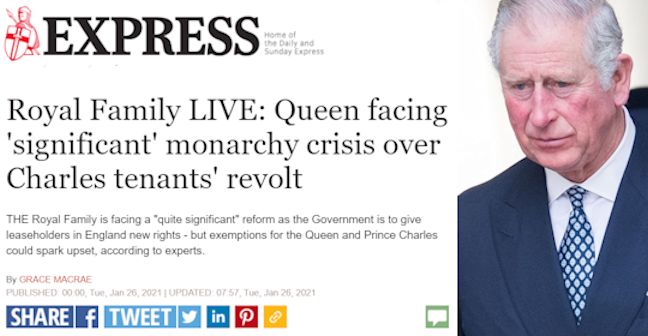 Your donation will mean Republic can do more to challenge the Duchy and to get the government to include the Duchy in any leasehold reform.

Here's what we can do with your support:

With your help Republic can do so much more. Thank you!

I've donated to Republic's Duchy of Cornwall appeal
Donate to the Duchy Law Appeal
We want to see the monarchy abolished and the Queen replaced with an elected, democratic head of state, not running the government but representing the nation independently of our politicians. An elected, effective head of state.